I'm spending a few nights with a friend in the historic river town of Wentworth, at the junction of the Darling and Murray rivers in the far south western corner of NSW.

As part of our 11 day rail and road journey, we were to stay in Mildura rather than Wentworth. But that was across the Victorian border, which closed after we booked and reopened following our arrival in Wentworth. As a result, we've had the experience of a small community instead of a large provincial city.

I enjoy a mix of spontaneous and planned activities. We've had a half day tour of the Lake Mungo indigenous archaeological site planned for several months, and we're doing that later today after heavy rains caused caused it to be postponed for 48 hours. 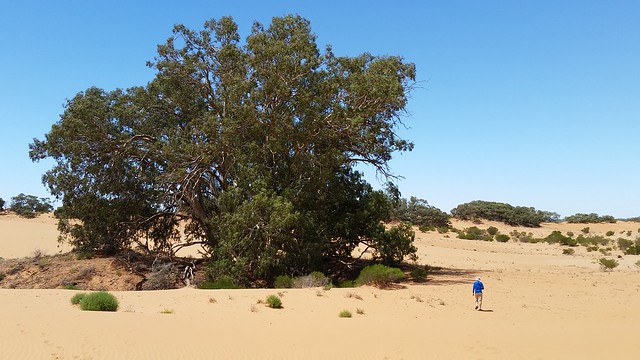 On our first day here we visited Orange World, where a citrus farmer named Mario takes tourists on a tractor train tour through his orchard. Although he is good humoured and obviously enjoys performing as a tour guide, life is hard. He makes only 40 cents per kilo from his oranges, so he's gradually switching to mandarins, which earn $1 per kilo.

We were the only tourists on his train, which looked to have capacity for 60 or more. That is the story of our holiday. Due to COVID-19, the motels, restaurants and other attractions have been near empty. Yesterday we were alone in our exploration of the ancient Perry Sand Hills formation near the Murray River (pictured).

It has been a pleasure to give patronage to local business owners. Yesterday I bought a scarf from a Wentworth weaver. I didn't need it but will enjoy it for its comfort, style and memory of our time here.

Surprisingly there is some optimism. We met a restaurateur who is about to open an upmarket eatery in Wentworth and did not seem too worried about the uncertain times. I hope his instinct is correct. 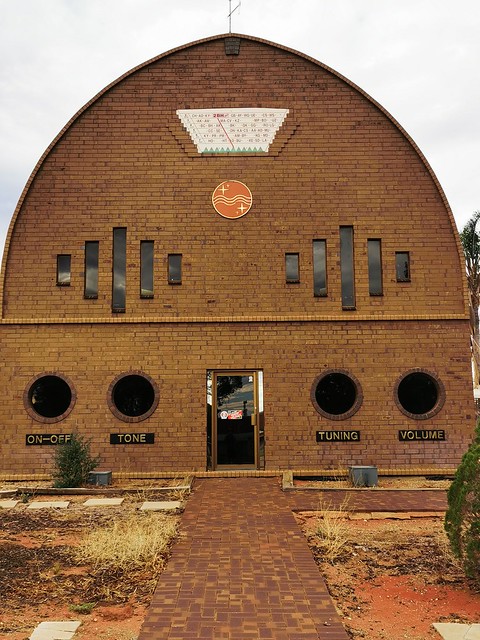 Our previous stop was Broken Hill, to which we'd travelled from Sydney on the weekly Outback Explorer train. The highlights for us included the Silly Goat cafe, which has coffee as good as any we've tasted in Sydney. They are so proud of it that they give their patrons a 'tasting notes' card.

But sadly the business is for sale. Times are tough also for the local commercial radio station 2BH, where we struck up a conversation with the advertising manager when we went to admire the unique studio building that was built to resemble a vintage radio set (pictured).

For most of the day 2BH networks shock jocks from Sydney but they have an engaging local breakfast program where you get to hear about power blackouts, extreme weather events and listener birthdays.

After Wentworth, we're driving through a few remote semi-desert towns including Balranald and Hay, before spending two nights in Griffith before our train journey back to Sydney on Thursday.