During the week I discovered that one of my Melbourne University lecturers, Chicago-born Donna Merwick, died a few months ago.

She taught me American History, I think in 1983. Then - in my honours year in 1985 - I did History and Anthropology, the course she taught with her husband Greg Dening.

Being a Jesuit student at the time, what interested me most was that Donna had been a nun and Greg a Jesuit priest. While they never mentioned it in the class, I learned from Donna's obituary that they had remained lifelong Catholics. 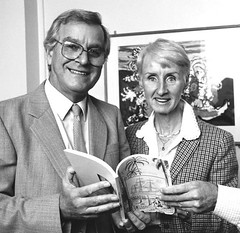 My first memory of Greg was when he would visit my school to research his 1978 book Xavier A Centenary Portrait. I remember him operating out of a store room in the boarding house in the South Wing, and it was an education in itself to witness a historian at work with the various papers he'd gathered.

He died in 2008, two years after the publication of Church Alive, his history of the North Sydney Jesuit parish. I recall him writing to me after I reviewed the book in Eureka Street, congratulating me on how well my review had grasped his anthropological method. I suspect he hadn't realised I'd been in his class years earlier, after which I was strongly influenced by his teaching that institutions were essentially cultures.

This shaped my view that institutions are often more culpable for child sexual abuse than the individuals who committed the abuses. I think many of these people have been made to carry total blame for actions that accorded with the profoundly evil cultures of the institutions, which can appear to carry on as if they and their leaders have nothing to atone for.

Cultures prevail on us, telling us how to act and behave. There are particular and often unspoken ways of thinking, feeling and believing that are either OK or not OK.

The anthropologist ascribes deeper meaning to everyday aspects of a culture. I remember Donna and Greg introducing us to Clifford Geertz's idea of 'thick description' and his book The Interpretation of Cultures, perhaps the most famous text of ethnography from the 20th century. I found it dense and hard going but its teaching, and that of Donna and Greg has endured.