Frequently at dinner parties, I look around and realise that I am the only Australian born resident at the table. It's a good feeling.

When I travel elsewhere in Australia - as I did at Easter - I notice that the population is much more 'white' than I'm used to.

I'm always pleased to arrive home in inner city Sydney, where the foreign born population is far in excess of Sydney's average of 39 per cent. Sydney has Australia's largest percentage of migrants.

I felt depressed this week when the Prime Minister announced a clampdown on immigration to appease and secure political support from One Nation and other right-wing voters. I know that the changes are largely cosmetic because it would be too damaging to our economy if they were significant in real terms. But that is no excuse.

It was about messaging and it was very rude. He said: 'Membership of the Australian family is a privilege and should be afforded to those who support our values, respect our laws and want to work hard'.

It's as if most migrants don't do these things already.

For me, the greater privilege is having my own values and cultural practices informed and enhanced by the presence of migrants in my life. It is my education.

Those Australians who are hostile to migrants and the pattern of migration in recent years share many of the characteristics of religious fundamentalism, which thrives on willful ignorance.

This week I read an excellent article linking religious and secular fundamentalism. It was written by the anthropologist and Marist priest Gerald Arbuckle in The Good Oil, the online publication of the Good Samaritan Sisters.

What I found most disturbing is his demonstration that there is no effective conversation or dialogue to be had with fundamentalists. 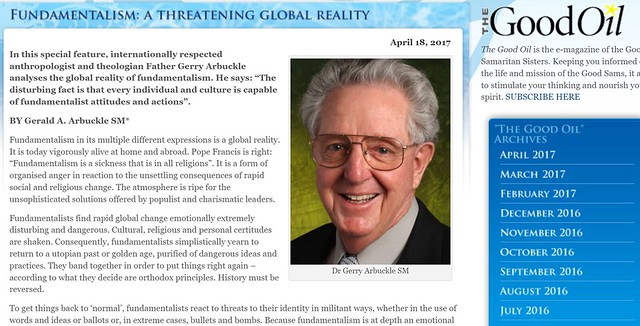 'Because fundamentalism is at depth an emotional reaction to the disorienting experience of change, fundamentalists are not open to rational discussion. Here in Australia there is a political fundamentalist movement to preserve the "pure, orthodox Australian culture" from the "endangering ways of foreigners", particularly Muslims. It matters little to adherents that such a culture has never existed.'

Indeed the Anzac Legend, which features prominently in the now more rigorous citizenship test, was confected for political purposes, largely in the Howard era after 2001.

Because much of this new fundamentalism is recent and superficial, my hope is that it will disappear as quickly as it arrived, even if the motivation is self-interest. The prime minister knows it and hopefully he can lead Australians to the realisation that the enviable standard of living Australians enjoy is a result of migration.