Yesterday I did a day trip by train to Canberra. That is something I get to enjoy a few times a year. I have the time and the means and the desire to get out of space-poor inner city Sydney, to an urban setting that is culturally alive but offers fresh air and open space in a bush setting.

Like capital cities in many countries, Canberra is an indulgence that all Australians are entitled to use but most don't. Its cultural institutions attempt to define the nation, which is important for social cohesion and the sense that we all belong. It's about continuing education, and encouragement to specify what we like and don't like about professional curators' ideas of Australian identity.

On my visits to Canberra, I sometimes catch up with a friend of nearly 40 years, which is what I did for the first couple of hours yesterday (he told me he regretted the infrequency of my Tiny Letters, hence this one). We walked nearly 10km around Lake Burley Griffin and the Molonglo River reserve, which is a nature and recreational reserve reclaimed from dairy farming. Then I spent the rest of the day at the National Portrait Gallery and the National Gallery of Australia. 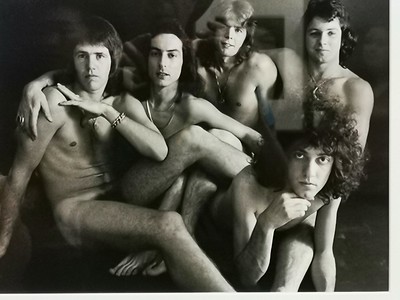 These two institutions, along with the National Library, are the ones I visit most, as they are a convenient 40 minute lakeside walk from the Railway Station.

The Portrait Gallery is probably my favourite. Currently there's the 'Pub Rock' exhibition of images of popular musicians from five decades from around 1960. There are depictions of groups such as Sherbet (pictured), which were very much part of my teenage years, and others such as Midnight Oil, which were less part of my formation, as their heyday was during my years of religious life rebellion against popular culture.

But there doesn't have to be a special show for me to come alive studying the regular collection's photographs and paintings of Australians whom the curators have judged notable. I guess they have to focus on the rich and famous, but the images I like most are of Australians I've never heard of. Yesterday's visit inspired me to imagine the photos from my collection I'd put in a portrait gallery of notable people from my own life.

The National Gallery is preparing for a larger exhibition opening next month, but there's the main collection and several small exhibitions. I saw some of them last time, but one titled 'The Body Electric' was new to me. 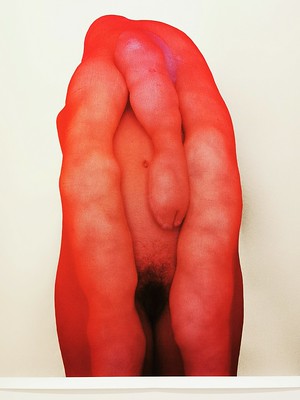 I thought it was going to be about the female gaze at the male body as an antidote to image-making's dominance of the male gaze at the female body. It was. But it was much more than that, exploring androgyny and gender fluidity, and also ways of subverting sex consumerism.

Polly Borland (image pictured) is an Australian artist who has lived and worked in the US for many years. She has some artfully ugly images that are 'resistant to easy consumption', and - in contrast to regular pornography - they deliberately 'refuse to satisfy'. She likes to subvert the marketers' hold on our sexual desires, where '[sex is] controlling us, we're not controlling it'.