There have always been euphemisms to describe people living with mental illness.

In a conversation a few days ago, a friend referred to a mutual acquaintance as being ‘on the spectrum’, as if he was not like the rest of us.

In the past, these people were called lunatics and ‘put away’ in an asylum. But more recently we have come to accept - and even celebrate - the reality that we are all mad or crazy to a degree.

Indeed the tag ‘Keep Newtown Weird’ has been used - with pride - to promote the part of Sydney where I live. My neighbourhood is a lunatic asylum! 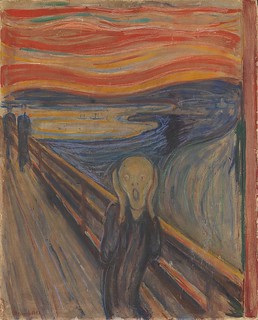 Yesterday the Guardian reported on an inscription - ‘Can only have been painted by a madman’ - on one of the versions of Norwegian expressionist painter Edvard Munch’s famous work The Scream.

The article said that Munch is now thought to have made the marking himself after attending an 1895 meeting in which a medical student said the painting must be the work of someone who was mentally disturbed.

It quoted a curator’s belief that the inscription is ‘a combination of being ironic, but also showing his vulnerability’.

The tortured face of the person in the painting is one of the most iconic images of modern art. It is a famously eloquent depiction of the anxiety that is characteristic of the human condition.

Coincidentally, last week I watched British director Peter Watkins’ controversial 1974 docu-drama on Munch, which has been lauded as one of the best films about art of all time.

The legendary Swedish director Ingmar Bergman called it a ‘work of genius’, but the Norwegian public broadcaster NRK tried to suppress its distribution. It is remarkable that the ostracism of Munch by Norwegian polite society seems to have persisted from his time until the late 20th century.

His legacy is the now widespread acceptance that it’s OK to externalise our tortured emotional and psychological state, in art and other forms of expression. Munch’s stubborn refusal to keep his mental anguish under wraps ensured that his work would continue strike a chord with subsequent generations of citizens of the modern world.