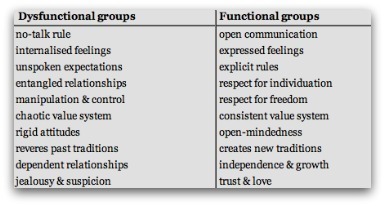 As an institution stricken with dysfunction, the ALP shares a bleak outlook with unions, churches and other organisations that are similarly sustained by shared ideals and belief systems, but are struggling. They all find it difficult to sell their values to a wider public and to recruit new generations of members.

There seems to be a tension between marketability and remaining faithful to the original charism or inspiration. In the past, these have worked in tandem, as they should. But it could be that the institutions have lost their nerve and no longer know how to be authentic, despite explicit and well-publicised attempts to be 'real'.

There is a defensiveness that shows itself in a culture of denial that rejects effective self-examination in favour of actual or de facto authoritarianism. In 2010 British Jesuit psychologist Brendan Callaghan wrote in Thinking Faith of a defensiveness that is also common in the corporate world:

All large institutions develop mechanisms of defensiveness. IBM, General Motors, Lehman Brothers — all have also paid the price for having developed an internal culture which made it impossible for those with responsibility to see the truth ...

Unthinking obedience and loyalty in the face of disagreement with authority can be a way of avoiding the pain and tension of conflict, doubly attractive if those in authority have arbitrary powers of appointment and promotion.

Callaghan's main interest is in dealing with the dysfunction that exists in the Catholic Church, with particular reference to sexual abuse. He traces the problem back to the Reformation and the post-Council of Trent seminary system which was structured by a need to defend received doctrine rather than play a part in the contest of ideas represented by the Enlightenment and the growth of scientific method.

He refers to the psychologist Erich Fromm's suggestion that we live with two conflicting tendencies: to 'move out of the womb' into freedom and responsibility, and to 'return to the womb', to certainty and security. The latter represents a gain of sorts, but it's actually a loss in terms of human development and fulfilled living.

It's not Eureka Street's purpose to transplant Callaghan's analysis of power structures in the Catholic Church to the Australian Labor Party. But members and observers of the ALP will recognise signs of the party's decline in that of the Church, and hopefully accept that both Gillard and Rudd forces have a particular job to do in order to make the party functional before the next federal election.