Yesterday a friend said to me in an email: 'I miss your Tiny Letters as they were always thought provoking'.

I'd written to tell him about a talk I'd been to on Sunday about religion on Australian radio in the 1940s and 1950s. The speaker was Professor John Potts of the Centre for Media History at Macquarie University.

It would be an obscure topic for most people, but not my friend and I. We worked together on religious programs for commercial radio and television in Melbourne in the mid 1980s. Then I was a producer at ABC religious radio in Sydney for four years from 1988.

The talk painted a picture of the sectarianism that divided Australian society for much of the 20th century. Unlike today, most people identified as religious, and there was deep enmity between Catholics and Protestants.

The divisions were breaking down by the time I was growing up in the 1960s and 1970s. But I have vivid memories of feeling an outsider when I was a cub in the scouting movement.

Akela (the leader) looked at me disapprovingly when he was completing my admission form and I revealed I was a Catholic. 'You mean Roman Catholic', he corrected me with a tone of admonishment. 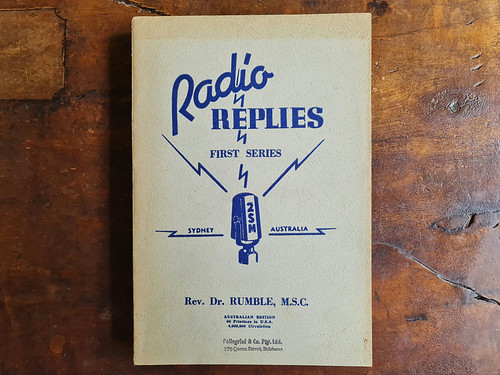 My father was young in the 1930s. He'd tell us about his cricket heroes Don Bradman and Stan McCabe, making it clear that he much preferred the devout Catholic McCabe to Bradman, who was said to be hostile to Catholics.

What most interested me about Sunday's talk was its depiction of the difference between religious broadcasts on the ABC from those of commercial radio.

In those days the commercial stations were controlled by interest groups, most notably the churches. In Sydney, 2SM was the Catholic station while 2CH was the voice of the Protestant denominations.

Their broadcasts upheld the sectarian divide with a style that was often combative. This is evident in the print version of 2SM radio priest Dr Leslie Rumble's Radio Replies, which is on my bookshelf as a relic from my father.

On the other hand, ABC religious programs maintained standards that attempted to avoid division. Even if it produced content that was bland in comparison with that of the commercials.

The long time departmental head Kenneth Henderson strictly forbade sectarian sledging. He was more interested in appealing to listeners who were more questioning. This was evident in his program Plain Christianity: A Word to the Wayfarer.

It's quite a blessing that the sectarian divide has all but disappeared. But perhaps the culture wars have taken its place, complete with the difference in styles of coverage between the ABC and commercial media.