A week or two ago my neighbours across the street erected an inflatable decoration with the greeting 'Have a Magical Christmas!' 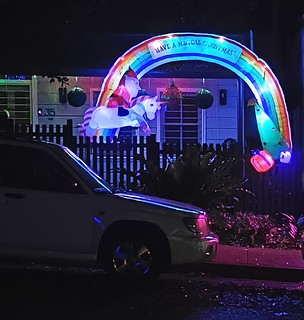 I found the emphasis on magic more thought provoking than most Christmas or holiday greeting sentiments.

It affirms this as the 'silly season', suggesting that Christmas is rightfully a time to suspend our usual behaviours in order to give momentary credence to irrationality and wishful thinking.

Magic is based on illusion rather than evidence. We are briefly putting ourselves under its spell so that we can recharge the batteries of our rationality.

It is important that magic does not become the year-round norm for us - as it is for some, including leaders of some of the most powerful nation states.

When my neighbours' greeting went up, I was pleased to see the way they were highlighting the need for our annual refocus so that we can better confront the serious challenges before us.

But circumstances changed quickly and now Sydney's silly season must be suspended until the virus can be brought under control. The message has to be negated. Don't have a Magical Christmas.

Whether or how effectively the virus is brought under control is entirely dependent upon our ability to suspend silliness and keep our minds tuned and eyes open to the evidence. Instead of letting down our guard, we're to wear masks and accept mandatory mask wearing if it is decreed.

It is of course unfortunate that the deliberate emptiness of the 'silly' season is routinely conflated with what Christmas is intended to celebrate. That is the Christian believers' moment of hope for a better world that is real. Arguably this hope is something that rationality depends upon but can't itself deliver.