Yesterday I enjoyed a day trip to Bathurst, three and a half hours west of Sydney across the Blue Mountains. It is an old gold mining town that is currently experiencing rapid population growth.

Like Ballarat and Bendigo in Victoria, the wealth from gold mining gave Bathurst a legacy of impressive buildings, and today there is no shortage of cultural institutions. 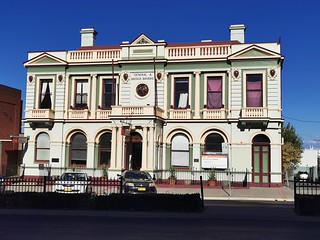 I visited the Regional Art Gallery, the Australian Fossil and Mineral Museum, and the Bathurst Rail Museum, which was opened only last year. The city once had a railway workforce of 500, including former prime minister Ben Chifley, who was an engine driver.

But because it was Anzac Day, the focal point was the Bathurst Town Square, where the war memorials are situated. There was the main memorial tower, which is famous for its bells. Yesterday they were peeling with identifiable tunes in an extended concert performance. 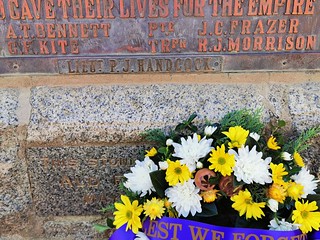 But of more immediate interest to me was the Boer War Memorial. That is because, while on the train from Sydney, I had read a Peter FitzSimons opinion article in the Sun-Herald newspaper. It concerned local war criminal Peter Handcock, who is disgraced but controversially honoured there.

Strangely it reminded me of my 2018 trip to Stalin's home town of Gori in Georgia, where they honour his infamy.

Handcock was executed with Anglo-Australian Lieutenant Harry 'Breaker' Morant, after being court-martialled and convicted of committing murder while on active duty in 1902. Lord Kitchener unveiled the memorial in 1910, but apparently agreed to do so only after Handcock's name was removed from the list of heroes.

However Handcock's name was restored in 1964 after lobbying from his son. Yesterday the memorial was adorned with flowers, perhaps put there by his great grandson, who maintains a website to tell the family's side of the story.

Breaker Morant was brought to prominence a few years later by Bruce Beresford's 1980 Australian war drama film Breaker Morant. Beresford told film critic Father Peter Malone in 1999 that he had 'never pretended for a moment that they weren't guilty'. He expressed dismay and said he was 'amazed' that so many people mistakenly thought the film was about 'poor Australians who were framed by the Brits'.

FitzSimons has attempted to demythologise Breaker Morant through his 2020 book Breaker Morant. I hope that Bathurst locals can quietly lay aside attempts to lionise Handcock and instead focus their energies on paying tribute to their real hero Ben Chifley.