On Sunday I went to Canberra and enjoyed a semi-regular walk with a friend from my days training to be a Jesuit priest.

We both left the Jesuits a little more than 30 years ago, and I think it's true to say that each of us walked away from the practice but not the positive humanitarian values of Catholicism.

I won't hesitate to identify as 'Catholic' when I complete the Census form later this year. But I studiously avoid participation in the life of the Church because it triggers a form of PTSD related to obedience.

So how do I know I'm still a Catholic?

For a long time I wasn't sure how to answer that question. But some time last year I stumbled across the English Catholic weekly publication The Tablet in the Readly electronic newsstand. 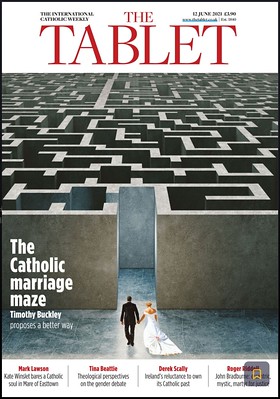 As I did many years ago, I now read it from cover to cover and can find interest in almost every article. I'm able to identify with the concerns and the lines of enquiry and particular curiosities of many of the writers. That's what tells me I am still a Catholic.

The Tablet has been published for 180 years and is part of a genre of news and culture reviews that also includes the New Statesman and The Spectator. It is proudly independent and is tolerated by many church leaders even though it does not hesitate to criticise the Church.

This week's cover story looks at Boris Johnson's recent Catholic marriage, which was 'conducted after due process and entirely within the laws of the land and of the Catholic Church'. It argues that Catholic teaching on marriage is full of anomalies and inconsistencies, and that those who were angered because they felt the Church gave the British PM special treatment denied them, are sadly mistaken.

Another article sees a path for the affirmation of transgender women through an analogy with transubstantiation, which is the Catholic teaching that bread and wine are changed into Christ's body and blood substantially - not symbolically - during the eucharistic part of the Mass.

It asks: 'Could we think of transgender as in some sense analogical to transubstantiation - not capable of scientific proof, but constituting a real presence which is different from the material appearance?'

It seems The Tablet can always find a sweet spot that is captive neither to ideology hostile to religion nor the entrenched obstinacy of many religious leaders.