Yesterday I went to the Art Gallery of NSW to see the John Olsen: The You Beaut Country exhibition. It has just opened there after moving from the National Gallery of Victoria, where it received mixed reviews. 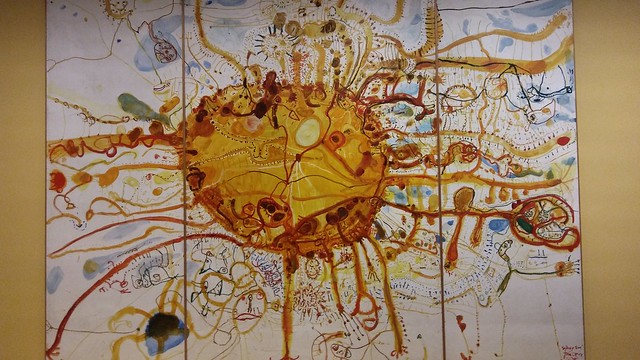 The 89 year old is often described as Australia's greatest living painter. But there was faint praise for the exhibition in The Age's review last September, which was headlined 'mildly entertaining at best'. It goes on to refer to the 'merry narratives and bright topographies' of the stand out works, as if they belong to the same genre as Ken Done's paintings.

In fact the works are deeply spiritual. They are mostly landscapes which initially struck me as mind maps with plenty of colour and verve. But the penny dropped when I saw the Gerard Manley Hopkins poem 'Pied Beauty' printed on the artwork label of a painting that is titled 'Pied Beauty' (Glory be to God for dappled things...).

I think that the concepts most commonly associated with Hopkins - inscape and instress - can equally be applied to Olsen's landscapes. Inscape is the distinctive design of everything in the universe, and instress is our ability to recognise the inscape in the world around us. 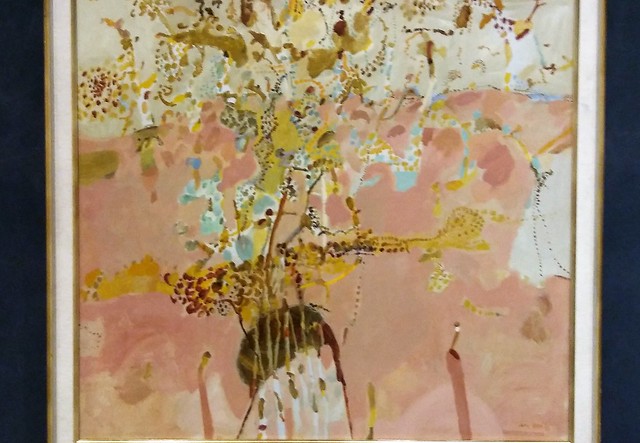 So what I called Olsen's 'mind maps' is also a kind of genetic code that reflects the inscape of the landscapes. When he paints, he instresses.

I don't know whether Olsen himself sees it that way, but that was my take on the paintings, having studied Hopkins when I was at university in the 1980s.

Viewing the Olsen exhibition made me think about how I look at landscapes. There are landscapes that stay with me in both my conscious and unconscious being.

When I visited Canberra at the weekend, I was moved by the harmony between the built and the natural environment. It stayed with me.

The buildings are mostly low rise and their architecture tends not to be ostentatious. The autumn colours were quite arresting and the sparseness of the buildings ensures that they do not dominate as buildings do in most large cities.

I also have an isolated memory from my first visit to Tasmania in January 2006. It was of the landscape around Queenstown which had been completely denuded by mining - moonscape was the word that came to mind. I would say that I was 'taken out of myself' when I looked at and experienced this 'moonscape'. It is quite remarkable that I retain the particular memory with such clarity after more than a decade. 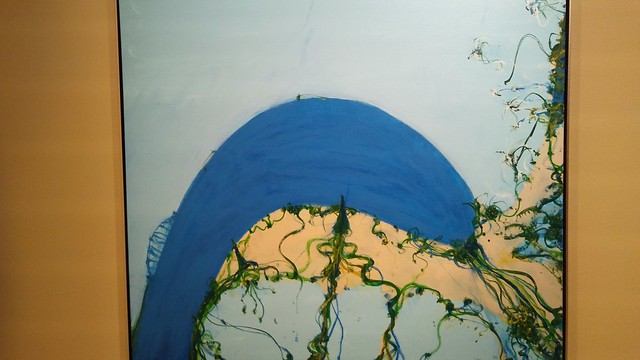 My experience of these two landscapes was heightened. I would normally say that I was arrested by them, but I think the terms inscape and instress are more apt to use in describing the way in which I apprehended them.

If I was John Olsen, I would paint them, and if I was Hopkins I would write a poem about them. But for me, they are just imprints on my memory, as such heightened experiences of landscape are for most of us.