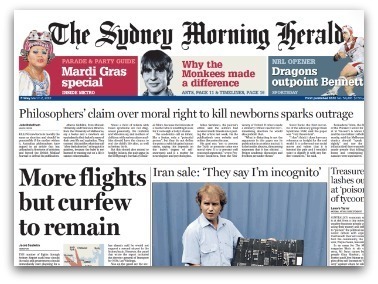 For many, it would have been alarming to read on Friday that 'killing newborns is morally the same as abortion and should be permissible if the mother wishes it'.

As reported in the Sydney Morning Herald, the idea is that around a third of infants with Down syndrome are not diagnosed prenatally, and mothers of children with serious abnormalities should have the chance to end the child's life after, as well as before, birth.

There is a lot that could and should be said about such a proposal, except that it is not a proposal, but merely a 'reasoned argument'. Arguments don't have legs unless they're greeted by popular acclaim, or perhaps contempt.

There is a danger that expressions of community outrage at the idea of infanticide could put it on the agenda for serious discussion.

Indeed that has perhaps already occurred in this instance, in which case organised community outrage could be appropriate. A lack of such an expression would then be a poor reflection on our society if we accept that the measure of a civilisation is how it treats its weakest members.

Julian Savulescu, who edits the British Journal of Medical Ethics says the two Melbourne academics who wrote the original article putting the argument for terminating newborns did not seek to 'present the Truth or promote some one moral view', but 'to present well reasoned argument'. He added that 'if others made a similarly refined case for recriminalising abortion he would also publish that'.

To an extent, his point is a good one. It's that academics operate in a laboratory of ideas, and it's their task to experiment with a variety of arguments in their attempt uncover the truth.


However some arguments are like dangerous viruses that should not be allowed to escape the lab, and their justification for infanticide seems to have done just that. It's therefore legitimate to suggest that this could be a matter of professional negligence.

A frightening example of a dangerous idea that made it out of the lab and into Victorian Government legislation is that of eugenics, the science of improving the race. It was promoted by a number of Melbourne academics such as the influential and well respected Professor of Anatomy at Melbourne University Richard Berry.

State Parliament unanimously passed a bill legalising eugenics in 1939, but it was never enacted due to the embarrassment of the Holocaust. The bill aimed to institutionalise and potentially sterilise groups such as Aborigines, slum dwellers, homosexuals, prostitutes and alcoholics, as well as those with small heads and with low IQs.

Actually the very point about taking a stand against infanticide is that it is a form of eugenics, which by definition has no place in a society that cares for its most vulnerable.