Over the past few days I’ve had contact with a friend with whom I’d been out of contact for most of the past 15 years. She has been intrigued by a few life decisions I’ve made in recent years, including my decision to retire at the age of 55 and to buy a tiny five square metre room in Paris to live here for four months of the year.

I’d depicted the room as austere, and indicated that’s the way I like it ‘for the moment’.  I think she interpreted what I’d said to mean that I might have plans for a major renovation at some stage, or to use the room as a stepping stone towards the eventual purchase of something larger with more luxury. 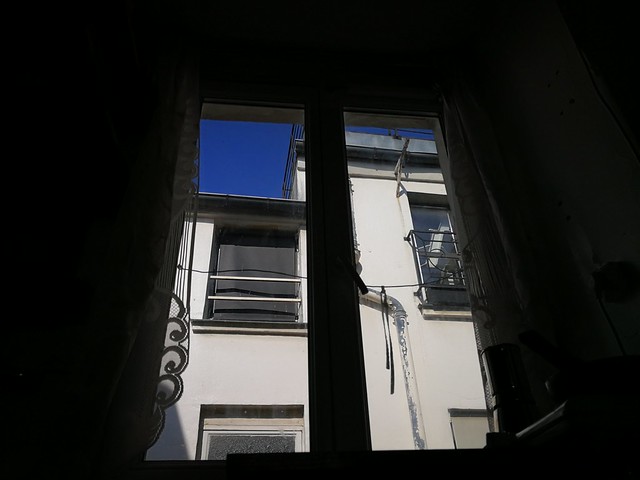 But the truth is that I sense I’ve reached a stage of life where I’m able to live comfortably ‘in the moment’. I like to think that I – and many of us – am already living the dream, and my particular gift is the realisation that I’m doing just that.

I’ve learned that there’s no point in envying others. It’s likely they envy us as well. I have one friend whom I envy because he speaks perfect French. He envies me because my circumstances allowed early retirement.

I wouldn’t absolutely rule out a grander Paris living space at some time in the future, but it’s simply not on my mind.  That’s the point of living for the moment. It’s related to a mindfulness and the savouring of what is available to our senses now.

My previous two month stay followed my taking possession of the room last October. It was taken up with emptying the room of somebody else’s ‘stuff’ and furnishing it with what I felt I needed such as a microwave, a slow cooker and a Japanese futon bed-chair.

However those things are ephemeral compared to what I’ve come to cherish as the room’s best asset other than its central geographical location. That is its position at the top and back of the building. This brightens the room with a generous amount of natural light and ensures I get a good night’s sleep despite being in the vicinity of many bars and restaurants. My Fitbit watch data tells me I’ve been sleeping eight hours on average, compared with six and a half in Sydney.

I also feel good about being able to climb to the sixth floor many times a day without breathing more heavily than normal. It’s a constant reminder that working on my physical fitness has a purpose.

Obviously there will be come a time in my life when this will no longer be the case. That will be another moment. But for now I am consumed by this one.