A few weeks ago, I was sitting outside my front door when a passer by smiled and said: 'You live in the best street in Sydney'.

She had a point. The street is known for its beautiful canopy of trees. It's also wide and quiet and five minutes walk to a sought after inner city alternative culture and shopping precinct.

When I arrived 27 years ago, there were still factories and warehouses. Many of the now gentrified residences were workers cottages. That's what they'd been for the hundred years or so since the street was constructed on a creek bed in the late 19th century. 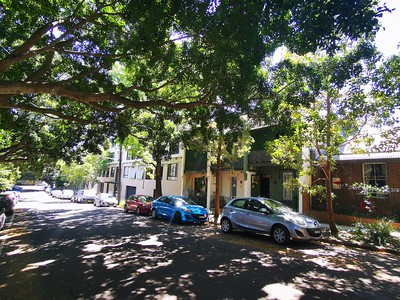 My first house was a small semi towards the top of the street. Then eight years later, I upgraded to a larger living space in a terrace twelve doors down.

During the lockdown earlier this year, I replaced the dead pot plant at my front door with a chair. Then I started sitting there most days. Like the old timer I have become while living in the street.

I didn't think it out too much. However I sense the chair placement was partly out of a desire to luxuriate in the tree canopy that I'd largely ignored all these years. But it was probably more that I wanted to be part of a neighbourhood, and it was a means to that end.

Somebody has probably written somewhere that a neighbourhood doesn't exist unless those living in it do something to make it happen. That's true.

I'm sorry to say that I spurned the neighbourhood making initiative of some people a few doors from my original house when I first arrived in the street. They invited me for a cup of tea but I politely declined out of shyness.

In the years since, that shyness has deprived me - and by extension my neighbours - of a sense of genuine neighbourhood.

But earlier this year things began to change. A couple from across the road left a packet of small Easter eggs and a nice note in our letterbox.

Then we reciprocated a month or two down the track by leaving some rhubarb compote at their front door. A while later, they accepted our invitation to afternoon tea. Now I often wave to them when I'm sitting on my chair and they're walking their dogs.

The chair has facilitated nods and eye contact and sometimes conversations with other neighbours, as well as passers by from other streets, and residents from the more densely populated warehouse conversion apartment blocks at the bottom of the street. I like to think that this year of necessary social isolation has also been for me, a time of social bonding and neighbourhood making.