Singer is the Australian philosopher most famous for applying John Stuart Mill's 19th century utilitarianism principles to modern ethical dilemmas. My study of ethics and moral theology in 1980-81 coincided with the publication of his classic text Practical Ethics. Singer was the bête noire of my teachers and I have since regarded his thinking with both interest and suspicion.

I was captivated by the social justice advocacy and activism of the time, which also featured prominently in the secondary school religious education curriculum. I remember Wendy Poussard's school text book Walk in My Shoes, which was used to teach students empathy with the poor. 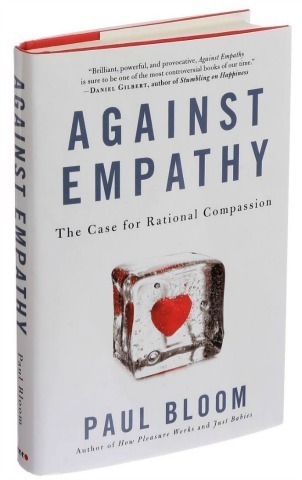 Poussard's text represented the view that there were particular values that were non-negotiable. They could not be subjected to any kind of utilitarian calculus. The argument against this is that the ethics of empathy can be extraordinarily subjective. We can put ourselves in the 'shoes' of whales, but what about other animals or human beings? As Singer argues, 'empathy makes us kinder to [beings] with whom we empathise'.

He says: 'Trump, in his campaign speeches, made use of the tragic murder of Kate Steinle by an undocumented immigrant to stoke support for his anti-immigrant policies. He did not, of course, offer any similarly vivid portrayals of undocumented immigrants who have saved the lives of strangers, although such cases have been reported.'

Singer's review article relates to the the book Against Empathy: The Case for Rational Compassion, written by Yale University psychologist Paul Bloom.

He supports Bloom's argument that our ability to reason has a crucial part to play in ethical decisions, and empathy is just as likely to lead us to do the wrong thing. 'Animals with big round eyes, like baby seals, arouse more empathy than chickens, on whom we inflict vastly more suffering'.

I notice that The Conversaton has today begun a series on empathy, including the question of whether doctors and other professionals need more empathy, and when it can be counter-productive. It gets into questions of how empathy can be measured and contained, and whether it should be.

In December The Conversation had an article on Matthew Flinders' encounters with Indigenous Australians. It looked at genuine evidence for his feelings of empathy and sense of morality but concluded that they were always contained by his sense of duty, which was to explore and map the Australian coast and keep his ship's company safe.

If Flinders' empathy was relative to his sense of duty, Singer's empathy is subject to his own particular kind of rationalism. In other words, Singer's rationalism is limited in the way that economic rationalism is subject to the principles of free market economics. He can't pretend that his is the king of all rationalisms. I think that we need to agree with him about the absurdities that he points out regarding the manipulation of empathy, but use art and spirituality to supplement the dominant rationality in our society.