At the weekend I visited two exhibitions of blurry photographs. On Saturday it was Stuart Spence's 'Truro' at Nanda\Hobbs gallery in inner-Sydney Chippendale (first photo), and on Sunday I saw Bill Henson's travelling exhibition 'The light fades but the gods remain' at the Newcastle Regional Gallery (second). 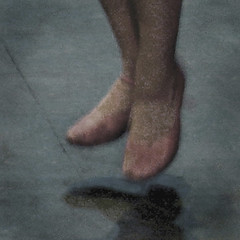 The aesthetic which refers to deliberately out-of-focus images is known as 'bokeh'. I don't know much about the theory but I do know that I have a deeper response to a photo that is off focus or off colour or imperfect in some other way.

Perhaps we relate better to imperfect photos than perfect photos if we are aware that we are imperfect ourselves. Or it could be that the blurriness represents a state of unconsciousness in which our own unconscious feels at home. Whatever it is, I find imperfect images more deeply satisfying than those that are perfect. 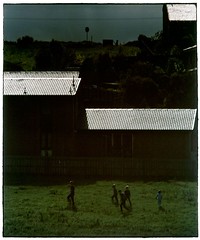 While I was at Nanda\Hobbs, Spence was giving a talk to a group of architecture students. He quoted Miles Davis' answer when he was asked how long it had taken him to learn the trumpet. 'Thirty years to learn it, and the rest of my life to forget it'.

For Spence, photos are 'acts of forgetting, of shutting down the monkey mind and allowing whatever the hell looks after this stuff, do what it needs to do'.

I find that as I walk around a city or some other location, the photos take themselves. Without much effort, I make images that have a deep resonance which either I can't or don't want to explain. 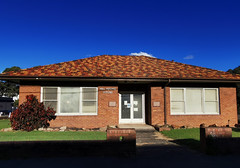 On my walk after seeing the Henson exhibition, I took a photo of Wal Young House, the headquarters of the Newcastle District Bowling Association. Obviously I experienced beauty and significance in what for many would be an unremarkable 1960s building.

I think I also had an unconscious fear that it would be demolished before too long, and taking the photo was an act of love or solidarity. Sure enough, when I got home I googled Wal Young House and found a Newcastle Herald report of a proposal to put a modern indoor sports complex in its place. 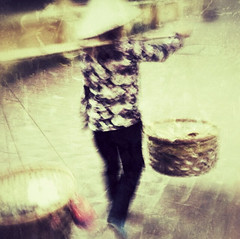 It takes a lot of work to achieve the artistry of a Stuart Spence or Jim Henson photograph. If I had the patience, I would probably exaggerate the colours rather than blur my Wal Young House photo. But I rarely have the commitment to give myself to such a task.

But I did about ten years ago, when I was bored on a flight back from Vietnam. The result was an image that has endured, of my fleeting acquaintance with an old woman carrying a load on her shoulders.