On Saturday I caught a bus home from the city. Despite the rain, I got off at the stop before the one closest to my house, to ensure I paid the short journey fare and saved 68 cents. I got slightly wet but was pleased that I'd saved the money.

Yesterday I read journalist Rick Morton’s new short book On Money. It's an essay about social inequality, with reference to his own relationship with money, which could hardly be more different to mine. 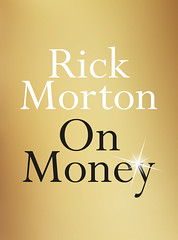 His friends tell him he's ‘terrible with money’ and he doesn't deny that. He writes that he didn’t own a car for a month after moving to Canberra for work. But instead of catching a bus to the office every day, he spent $600 on taxis. Later he mentions paying $75 for a valet to park his car while staying at a hotel in the Sydney CBD.

Morton grew up in poverty and was never taught to save or invest. He's only now earning enough to think beyond his own basic needs. He's reached the milestone of being able to help his still financially struggling mother by providing a few comforts including a $14,000 bathroom renovation.

I was brought up quite differently, in a middle class family where we learned to save and invest for the future. I believe that some degree of financial education is the key to avoiding falling into poverty or relative poverty. My father made sure that I understood about compound interest, and the difference between good and bad debt.

Good debt is absolutely essential for maximising our investment potential. However after paying off my house, I've decided that I prefer the karma that comes with having no debt.

Leaving aside the purchase of essentials and the occasional luxury - and supporting good causes - I've come to believe that money is meant for saving more than spending. Its purpose is to provide cross-generational security, and we are its stewards. In the way that we take care of the natural environment for those who come after us.