Pope Francis has said he's inclined to give a few coins to beggars on the street. Enough to send a token message of support but not enough to create a dependency on charity.

This would not work for me because I do not carry coins. But the news item did make me think about messages we send by how we choose to pay for goods and services. 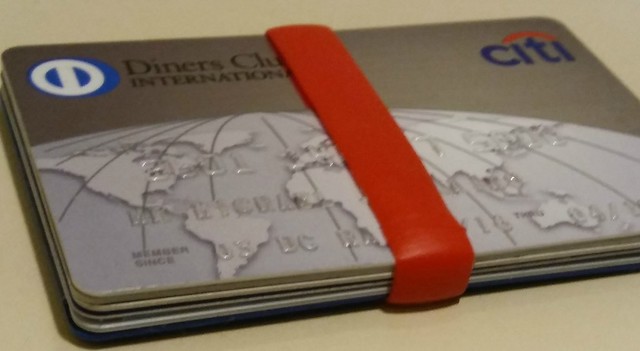 I used to think that I was sending a message of solidarity to small business owners if I handed them cash rather than a card. But about ten years ago my mechanic told me he prefered card payments because the cost of handling cash was higher than the card fees they had to pay the bank.

He claimed it was a furphy that bank fees for card payments cost merchants more than cash. With cash, they need to have change on hand and pay staff to securely take the bags of cash to the bank. Charging a fee for card use was a scam, he said.

Obviously each merchant's circumstances are different, but since the conversation with my mechanic, I have had no hesitation using a card for payment.

Which card, though, is another matter.

In addition to my Mastercard, I have a now rare Diners Club card, which I got fee free in a promotion about 20 years ago. It appeals to my sense of history because it was the world's first payment card when it was introduced in the 1950s.

But I actually like the fact that - in common with American Express - it costs merchants about twice as much in bank fees compared to Mastercard or Visa, every time I use it. I never use it for payments to small businesses, but Diners is my card of choice when I shop at Coles or Woolworths.

It is to give them a token financial sting as payback for their exploitation on several fronts of farmers and other small business owners. I know that vengeance is never a good thing, but it does give me satisfaction to know that I have the power to use my Diners card symbolically in such a way.

For years they have put financial pressure on these small businesses through their policy of delaying payment of invoices for the supply of produce and other goods and services. However at long last, Coles announced this week, with some fanfare, a change in policy. They have promised to pay invoices within 14 days, in what they are disingenuously touting in newspaper advertising as a show of support for farmers.

I will consider changing my own policy in favour of using my Mastercard rather than my Diners when I shop at Coles.