On the train to Canberra yesterday, I read a newspaper review of the Ink in the Lines tattooed war veterans exhibition at the Australian War Memorial. 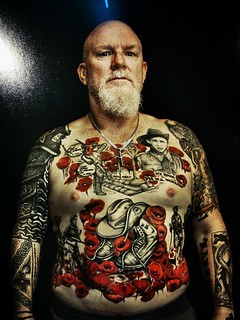 I've avoided visiting the War Memorial because expert commentary I've followed depicts it as a propaganda tool in the culture wars. But I decided to see this exhibition because it seemed different. And it was.

Its focus was on veterans getting 'inked' as a way of dealing with the trauma of war, including killing and witnessing the killing of comrades.

That trauma is now referred to as PTSD, but it was originally labelled 'shell shock'. I remember my mother explaining that her father had experienced shell shock after serving in the First World War.

To me it explained why my grandfather always seemed distant, and it occurred to me that this must have had an effect on his style of parenting. I'm sure this is not uncommon. 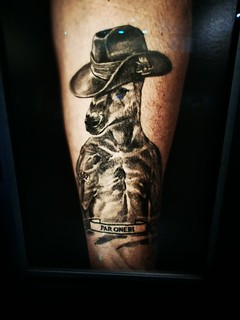 As depicted in the exhibition, tattoos are able to tell the stories that veterans keep to themselves because they are too painful to verbalise. This is how Elaine put it:

'A transformation’s just happened after the tattoo got put on, and it’s like an armour for me to say, "Wow. There is life after. You can recover. You just got to reach out and ask for help."'

I've never thought about getting a tattoo because it's not something that those of my generation and social grouping do. That is unlikely to change. But when I consider the scars of my years of institutional living, I can see how tattoos can help with the healing.