Yesterday I watched a 1970s fantasy documentary that sets ‘backward’ Filipinos against the more technologically advanced and superior Western nations.

Kidlat Tahimik’s Perfumed Nightmare was Sunday’s film of the day on my favourite streaming platform Mubi.

In a whimsical semi-autobiographical style, the jeepney (mini-bus) driver in a small village is mesmerised by the American dream of space travel and hi-tech industrialisation. He attends a Scouts convention where he meets a rich American who promises to take him to the US, but they first spend a year in Paris working for his bubble gum machine business. 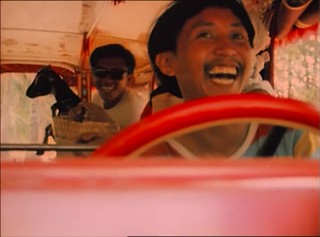 It’s there that he gets to identify with the traditional street market vendors, who are losing out to the spread of supermarkets. He becomes an advocate for pushback against the consumer capitalism that has so thoroughly exploited his own country. The Philippines was formally an American colony between 1898 and 1946, and informally for much longer.

The film took me back to my three month visit to the Philippines in the summer of 1983-84, where I stayed in villages with people who aspired to be part of the modern world even though they had been impoverished by the self-serving actions of the wealthy nations and their investors.

I remember being disturbed and perplexed by people rotting their teeth drinking Coke and Pepsi and feeling good about it.

I spent time with the Mindanao Development Centre, which was involved in social analysis to lobby on behalf of the poor people who were losing their livelihoods to the multinational corporations. I also visited an Australian priest - Father Brian Gore - who was jailed for emboldening sugar industry workers to assemble and fight for their rights.

I remained interested in the effect of colonialism and neocolonialism on the wellbeing of people in poorer countries. I remember travelling through Java in 2014 and visiting the museum of the 1955 Bandung Conference that sought to unite developing nations against the stranglehold of the developed world.

Then on Saturday, I bought East Timor coffee at my local Carriageworks market in Sydney. I talked with the stall holder about my work with Caritas in East Timor in 1999. She told me about establishing the development aid projects which my coffee purchase was helping to sustain.

But while individuals and small organisations from the developed world continue to do what they can for those in developing countries, the behaviour of governments is as shameful as ever.

We have the continued slashing of aid budgets. There is also the aggressive action by our Federal Government in prosecuting the whistleblower Bernard Collaery, who exposed our government’s 2004 bugging of the East Timor cabinet offices in an effort to gain an unfair advantage during negotiations for a petroleum and gas treaty.