Often on a Wednesday morning I'll see a film at my local Newtown Dendy cinema. Today it was the New Zealand biopic Whina (pronounced Feena).

Whina Cooper was a Maori social and political activist who died in 1994 aged 98. She is best known for leading an inspirational and consequential land rights protest march from the tip of the North Island, to Parliament in Wellington, in 1975. 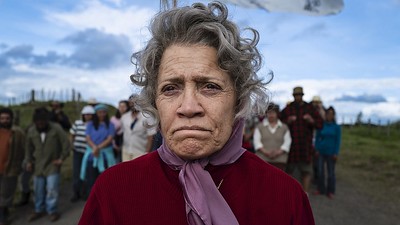 In 2020, a tunnel boring machine working on Auckland's City Rail Link tunnels was named 'Dame Whina Cooper', to honour her strength and determination.

She was a devout Catholic who applied her characteristic peaceful resistance to the dogmatism of the Church when it stood in the way of her dignity and that of her people.

She reacted with stoicism when the priest publicly denounced her for becoming pregnant out of wedlock. Then on a later occasion, she stood up and challenged him at Mass when he railed against a set of Maori carvings that were 'idolatrous' and sexually explicit.

Her stand against the hectoring Irish missionary reminded me of the outrage provoked in Ireland by 80 year old Father Seán Sheehy's condemnation of same sex marriage and abortion rights. Sheehy delivered his outspoken homily ten days ago at St Mary’s Listowel, in his native County Kerry.

Commentator Derek Scally suggested in Monday's Irish Times that 'the problem of old Catholic Ireland was not priests preaching rampant sin but ordinary people feeling – and making each other feel – rampant shame.'

The film showed Whina's ability to lift her people up and make them feel proud.