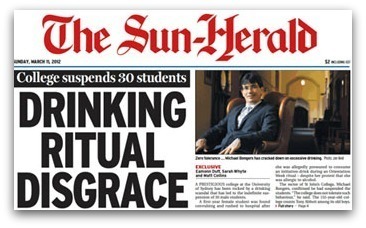 The Church is recognised as having tolerated abuse of children and young adults, and sometimes regarded it as character building, in connection with corporal punishment and activities such as drinking rituals at university residential colleges.

Yesterday’s Sun-Herald led with the story of a first-year female student at the Catholic St John’s College at Sydney University rushed to hospital after being pressured to consume an initiation drink during an Orientation Week ritual.

In recent years other colleges at the university have also had to deal with the entrenched culture of ritual humiliation involving alcohol and sex. A student from Wesley College at Sydney University wrote in 2009:

Many young women feel disempowered, or attempt to win male 'respect' by going along with their incessant chanting to 'get your tits out for the boys' – and losing their self-respect.

Yesterday’s Sun-Herald revealed that the St John’s College rector Michael Bongers has implemented the college’s zero-tolerance policy on excessive drinking and other anti-social behaviour which had been a more or less accepted part of the college’s culture for many generations. Bongers has suspended 30 students over the recent incident.

Suspending 30 students makes a powerful statement that ritual humiliation destroys rather than builds character, and it won’t be tolerated. It was a tough and potentially divisive decision that will involve collateral damage. The college is likely to take a substantial financial hit, and at least some of the 30 will feel they played little or no part in the offence and do not deserve to have their education disrupted.

Zero-tolerance is also the risky strategy that federal defence minister Stephen Smith employed in dealing with the Skype scandal in the defence force. He perceived that the message sent by Commodore Bruce Kafer’s insensitive timing of his disciplining of the alleged victim undermined public condemnation of the act, even though Kafer did not break any rules. Smith has put his job on the line, and hopefully he and the defence force will emerge stronger after the dust settles.

Military cadets and college students are at an impressionable and vulnerable stage of their life. Technically they are no longer minors, but they remain sensitive to many of the stresses that can undermine their confidence for the rest of their lives. It’s worth alluding to the positive energy created by the recent Protecting Victoria's Vulnerable Children inquiry.

In Eureka Street last week, Monsignor David Cappo highlighted its strategy of both prevention and high level intervention. He also discussed the interconnectedness of issues such as violence, alcohol and substance misuse and mental health problems.

When a cocktail of such factors is placed in the hothouse environment of a military academy or university college with a tradition of robust behaviour, there is a certain inevitability in the result. But this need not be the case if those in charge are prepared to take decisive action to stop behaviour that has been tolerated in the past.