The Australian newspaper is always looking for an excuse to attack the ABC. But it is on more solid ground than usual this week, with articles yesterday and today criticising moves by management to replace the specialist editor for religion and ethics Jane Jeffes with a non-specialist.

Specialisation is what gives public service broadcasters their punch. It distinguishes their output from the infotainment programming of their rivals, at least by degree. 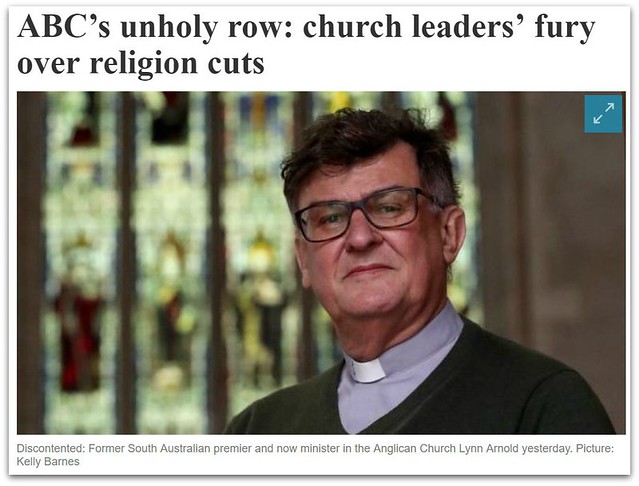 Specialists are equipped to go beneath the surface and give the public an understanding of issues they would not otherwise get. For instance how to distinguish Muslim fundamentalists from those who are simply trying to live their faith in the Australian community and maintain their heritage.

ABC management has been trying to kill its religion specialisation for at least three decades. I remember battles from my own time there, when I worked in ABC religious radio for four years from 1988. There was a familiar pattern in which religious programs were threatened, church and other religious leaders would vent their outrage, and there was subsequently a reduction in the scale of planned cuts.

Can that happen again this time? Probably not.

With the sexual abuse scandals and the recent Census statistics charting a significant rise in the number of non-religious Australians, church and other religious leaders don't have the authority they once had.

However ABC management would be doing Australians a disservice if it exploited this as an opportunity to kill specialist religious programs. For the religious unit services non-religious 'searching' Australians as much as it does those who are formally religious.

It is been doing this for years. In 1987, the visionary head of the religion Dr David Millikan commissioned Caroline Jones to present the radio program The Search for Meaning.

It was a departure from traditional religious programming that had a wider impact. After it ended in 1994, Caroline was invited back to ABC TV to help foster a reflective, values-based approach to news and current affairs programming in the long-running Australian Story.

This more inclusive style was also evident some time ago in the coupling of religion and ethics in the brief, and formal designation, of the 'religious' programming genre.

While the article in The Australian seems to suggest that this represents a weakening of the religious programming strand, I believe the opposite is true. Indeed the study of philosophy and ethics was an integral part of my Jesuit religious training, as it is in other Catholic and some Anglican traditions.

The idea is that it helps to remove religion from the religious ghetto. The participation and leadership of specialists ensures that there is an informed conversation between religious and non-religious Australians. That is why the ABC needs a specialist to oversee its programs in this area.