I'm spending just over a day in Brighton. Last May I spent two days here. It's the month of the Brighton Fringe and the Brighton Festival.

I first came here last May when I was alerted to the festivals by my niece's one hour performance piece 'The Daddy Blues', which was about growing up with a difficult father.

The timing didn't work out for me to see that, but I came here and enjoyed other performances and events. So a return May visit to Brighton was always on my agenda. 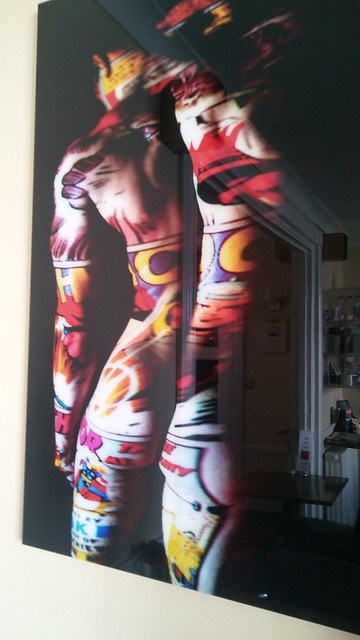 Yesterday's surprise was a nice sunny day. I also enjoyed the contrast in culture and outlook from my rural Kentish base of Faversham, which in itself is a beautiful town. Faversham voted decisively for Brexit, while Brighton was overwhelmingly in favour of remaining in the EU.

Brighton has a lot in common with Newtown in Sydney, so in some sense it's like returning home. It was a pleasure to walk the streets and investigate what I might sample from the hundreds of festival offerings available, including cabaret, circus, comedy, dance, spoken word, music, theatre and visual arts.

What I ended up experiencing was really quite random. Two blocks from my guest house, I came upon an exhibition of body art by young French artist Charly N'Doumbe. It was not tattoos, but photographs of coloured light creations projected on male and female nude bodies and printed on aluminium. They looked like whole body tattoos. 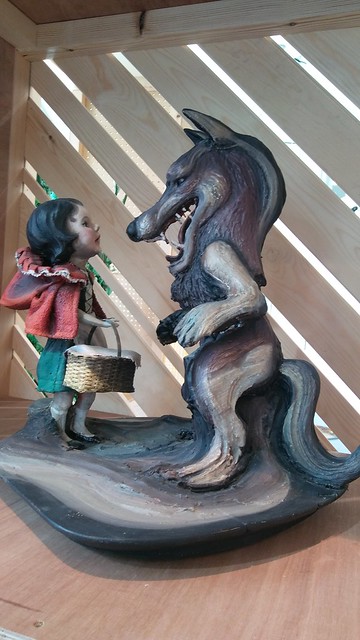 Next I walked up Grand Parade to the University of Brighton, where last year I'd seen a book art exhibition. This year it was doll sculptures, some of which were presented as if they were participating in a life drawing class.

Last Saturday the artist Cathie Pilkington held a 'Corpse workshop', so I guess you could call it corpse art. There was quite a variety of exhibits and forms, and they seemed to be peaceful rather than macabre. There was even a work of taxidermy, a stuffed dog restfully lying on a mat.

Finally, in the evening I attended an improvised electronic jazz music and contemporary dance performance titled Ahtuf Kontrol. It was members of a local family, including father on the keyboard accompanying his dance school graduate son, along with fellow musicians with electric guitar and trumpet. 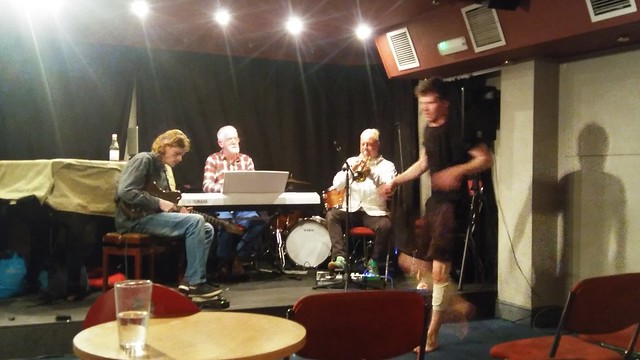 The experience reminded me quite strongly of the Interplay workshops I've done several times a year in the Newtown parish church in Sydney with the parish priest Peter Maher. It's about acting out feelings and stories in body movement, often to music.

The Interplay reminder had me wanting to rise from my chair and move my body according to how I felt about the performance. But it was still England, and all members of the audience were politely restrained in their seats for the duration. In control of their emotions, even though they were viewing a performance titled 'Ahtuf Kontrol'.