This morning I read two articles. One was about the prospect that software and artificial intelligence will disrupt most traditional industries and professions within the next few years. The other was about the eighty fold increase over the past three decades in the number of pilgrims travelling the various routes of the Camino to the city of Santiago de Compostela in Spain. 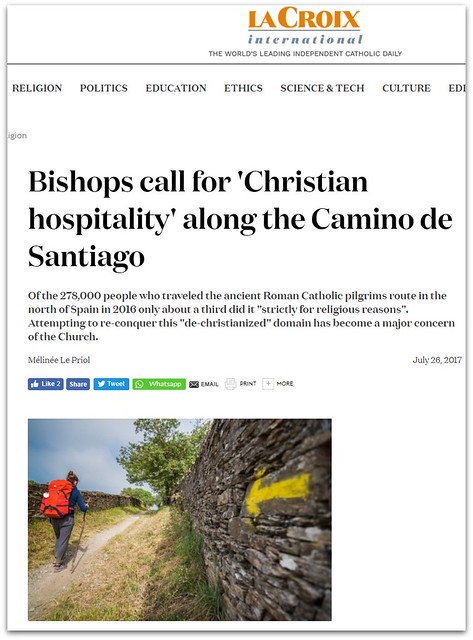 The first is one of those presentations on disruption that itself sets out to disrupt the way people feel, think and act, and relate to each other. It has a deliberately scary title: 'Must read article on how our lives will change dramatically in 20 years'. It suggests that some people will have their way of life destroyed while others will benefit from access to new opportunities to improve their lives, especially in health and education.

What uber and airbnb have done to the taxi and hotel industries is just the beginning. Many lawyers and health professionals will lose their jobs as tools such as the IBM Watson natural language question answering computer system take told. 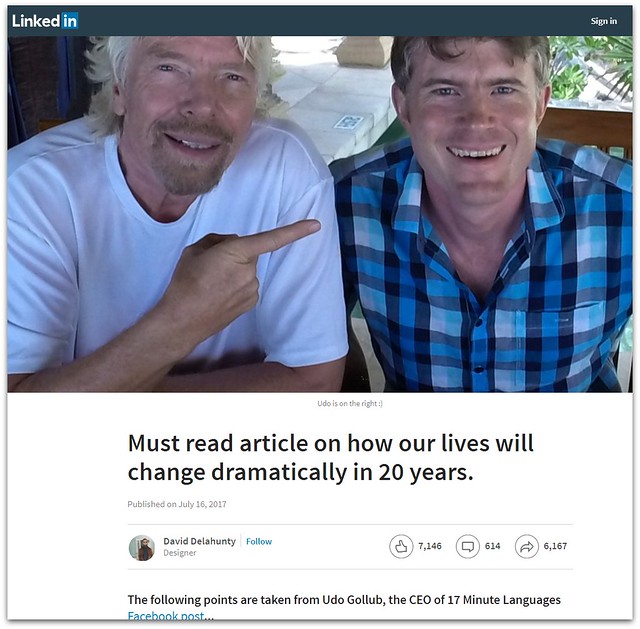 We'll have legal advice 'within seconds, with 90% accuracy compared with 70% accuracy when done by humans'. Meanwhile solar power will give us cheap electricity, and that will give us abundant water with desalination. Everybody on the planet will eventually have as much clean water as they want for nearly no cost.

The shift to reliance on software and artificial intelligence is largely a transition from the analogue to the digital world, probably the most dramatic change in the history of human civilisation.

But we're faced with a condundrum. Our problems are solved in a flash but our lives have become less satisfying because we are less tactile and grounded in the way we live.

Perhaps this has something to do with the statistic about the eighty fold increase in the number of Camino pilgrims. that I read in the article in La Croix International. In the digital age, spiritual quest and our continuing need to put 'boots on the ground' are still important for most people.

What is most interesting to me is that only a third of the Camino pilgrims are doing it 'strictly for religious reasons'. That refers to observance of the Catholic rituals associated with the Way of St James that dates back to the Middle Ages.

I infer from this statistic that the two thirds majority have either a non-sectarian spiritual purpose, or they're using it as a digital detox, literally putting their boots on the ground.

This month the French and Spanish bishops issued a pastoral letter that expressed both their alarm at the Camino statistics' evidence pointing to dechristianisation, and excitement at the opportunity this represents to evangelise the non-believing pilgrims.

They want to 're-spiritualise' the journey by promoting a 'Christian' hospitality that is distinct from ordinary non-sectarian hospitality. I hope it leads to much conversation between believers and non-believers. Also market research on the part of the bishops, as they seek to find out why the Camino is relevant to the majority of the pilgrims but the Church is not.