While in Canberra on Sunday, I visited the National Museum of Australia as part of my resolve to see as many of the national capital's cultural institutions as I can while my six month NSW country train pass remains valid.

Often I visit a place and only learn about its significance afterwards. There are many stories of Australia's past contained in the Museum but I must have missed the story of the Museum itself, in particular that of its building and location. 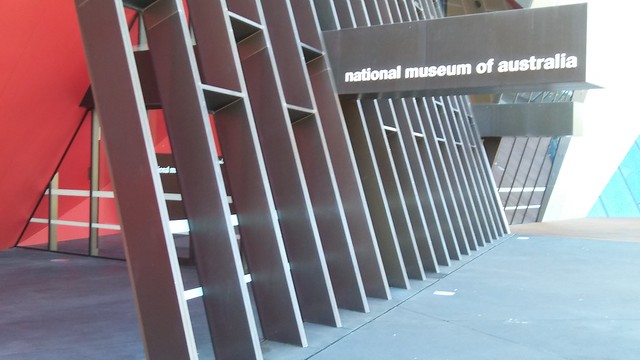 The Museum was established by an Act of Parliament in 1980 but did not have a permanent home until the current purpose built facility was opened in 2001. It is located on the Acton Peninsula near the Australian National University. The site was previously the location of the Royal Canberra Hospital, which was demolished in tragic circumstances in 1997.

These involved a failed implosion that accidently killed one spectator and injured nine others. Large pieces of debris were unintentionally projected towards onlookers positioned 500 metres away on the opposite shore of the Lake. This was a location unwittingly considered safe by the ACT Government, which had encouraged Canberrans to come out to bid farewell to the hospital.

Most people regard mid 20th century cream brick buildings as eyesores and are quite pleased to see them demolished. But I very much like them and regard them as important examples of our built environment heritage. I thought that it made a fitting historical counterpoint to the spectacular modern architecture of the other Museum buildings.

Inside the main building, I found that I was able to connect with a number of the hundreds of stories contained in the exhibits. One that comes to mind is that of the Canning Stock Route in Western Australia, which begins at the town of Wiluna and takes a route north to the Kimberley.

I visited Wiluna after I drove across the Nullabor in 2003. I recall that I would have loved to have travelled through the Western Desert along the Canning Stock Route in my Hyundai hatch back, which I had driven to that point from the east coast. But common sense got the better of me and I spent an hour or so in the town before proceeding along the straight dirt road to Meekatharra.

It was only yesterday that I learned of the surveyor Alfred Canning's poor treatment of Aboriginal guides following his appointment to the stock route project in 1906. He was criticised for his inhumane practice of using chains to deprive them of their liberty, effectively using them as slaves. 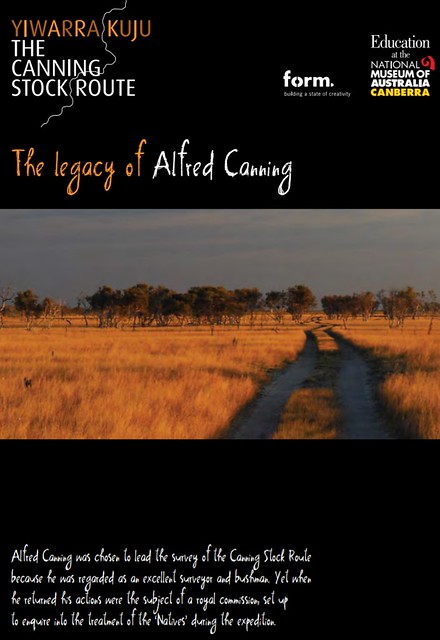 This led to a Royal Commission, which saw Canning exonerated after the Lord Mayor of Perth appeared as a witness on his behalf. The cook who made the complaint was dismissed. White Australians still celebrate Canning as the pioneering surveyor who plotted the Rabbit Proof Fence. It is good to know the other side of his story.

It was the exhibits involving indigenous Australians that I found most engaging because they unlocked for me the perspective on history that I was denied when I first learned Australian history at primary school. These included the furphy that Tasmania's Aboriginal population was completely wiped out.