There has been an epidemic of people drowning in backyard pools and public swimming locations this summer. There have been almost as many water deaths as car fatalities. Governments are being challenged to spend money to encourage more people to learn to swim.

For me it brings back childhood memories of the Melbourne Herald newspaper's learn-to-swim campaign that was founded in 1929 and continued for five or six decades. Young Victorians were given their 'Herald' certificate if they could swim 25 yards (22.9 metres). 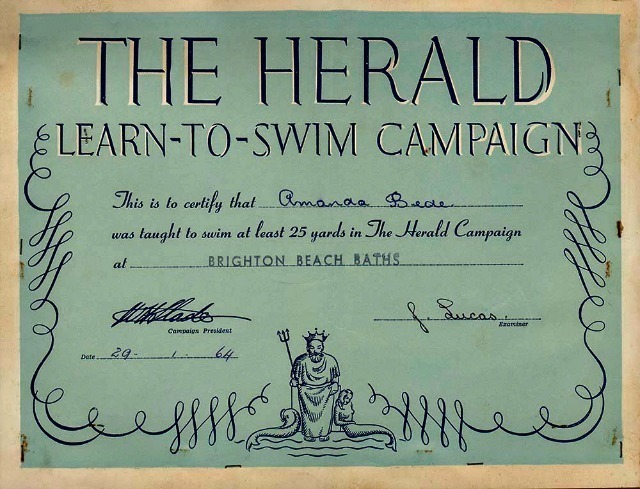 The campaign's longtime chairman was the legendary Sir Frank Beaurepaire. He the program enabled many thousands of people anually to 'hold their own in the water'. Learning to swim, he said, was 'a great step in developing self confidence, and once learned, the ability to swim is never forgotten'.

The ability to swim was an article of faith in my family, as it was in many families in regional areas. We all got our Herald certificate with no trouble at all. In fact we considered 25 yards was nothing. We could easily swim the 50 metre length of the local Olympic pool (54 yards) and would set our sights on 10 lengths.

For me the temporary stumbling block was diving. For a long time I couldn't do it, no matter how hard I tried. I remember the breakthrough happening as an eight year old in 1968 when my uncle visited from New Zealand. Somehow he instilled in me the necessary confidence.

But confidence comes and goes. I remember adult authority figures affirming me as a slow but strong swimmer. That was enough to encourage me to train to become faster so that I might compete. However that quickly came to an end when I went to boarding school in the city and one of the teachers joked that I swam like a whale. While nobody unlearns how to swim, this destroyed my confidence and any ambition I had to do swimming as a competitive sport.

Sometimes I think of the Herald learn-to-swim campaign as quaint and belonging to another era. I'm not sure when or why it ended but am curious. Sadly nothing has replaced it.

I imagine that it was considered lacking in coolness. Last year's ABC TV miniseries on the Christos Tsiolkas novel Barracuda might have changed this, but it was too fleeting and made for the wrong audience. Probably it would take a reality TV event to make learning to swim a must for young people.

I also think about the nature of campaigns run by media organisations. They used to be about public service, but now it's more ideology. Perhaps the Herald learn-to-swim campaign ended around 1987 when Rupert Murdoch purchased the paper. For in recent years, his papers have campaigned against public safety for young people, on ideological grounds, with their opposition to the government Safe Schools anti homophobic bullying program. No doubt that is a sign of the times.