Yesterday I enjoyed Eureka Street's article about a writer exercising his 'morbid fascination for the recently deceased' by reading the death notices in the newspaper.

'[They] offer up the real inhabitants of our world - our neighbours and bosses, our friends and partners, our mothers, our fathers, our grandparents... These people are not the airbrushed celebrities, political blowhards or violent predators that often adorn the front pages.' 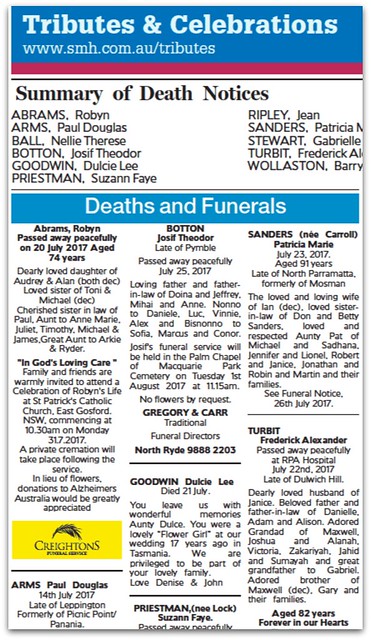 I have a similar morbid fascination. In today's Sydney Morning Herald death notices, I read about Barry. He was 'a unique man who faced life with positivity, determination and a smile that could light up a room'.

He will be 'greatly missed', but the notice promises that his family and friends will 'remember his wacky jokes, shaggy dog stories and universal theories'.

I wish that I too could enjoy some of Barry's jokes, stories and theories. But death notices don't go beyond the bare bones of the person's life. This kind of detail is shared only if the person is famous, and it's in the obituaries rather than the death notices. 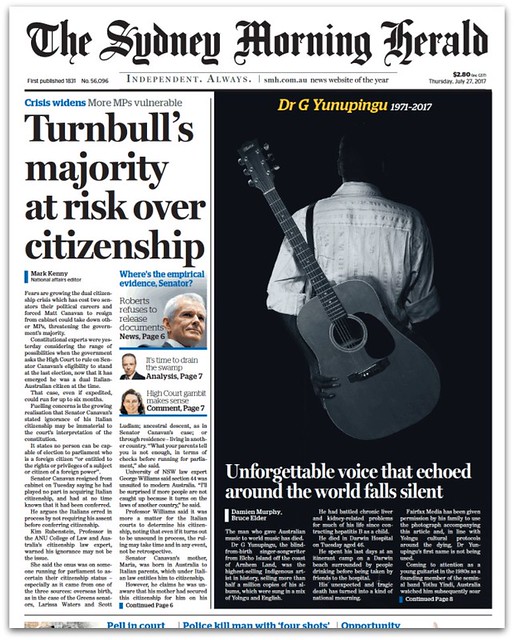 Unusually today's obituary is on the front page because of its particular poignance. Its subject is not an airbrushed celebrity but the much loved blind Aboriginal singer Dr G Yunupingu, who died this week at the age of 46.

The obituary quotes a music critic's estimation that Yunupingu possessed 'the greatest voice this continent has ever recorded', one 'so beautiful and so emotion-laden that it invest[ed] every song with a passion and pathos which [were] quite overwhelming'.

In a way the complementarity of having both the paid death notices and the featured obituaries works well. Unfortunately, in terms of accessibility it does not fare well in the transition from its more intuitive presentation in print to obscurity in the now more significant online versions of the newspapers. 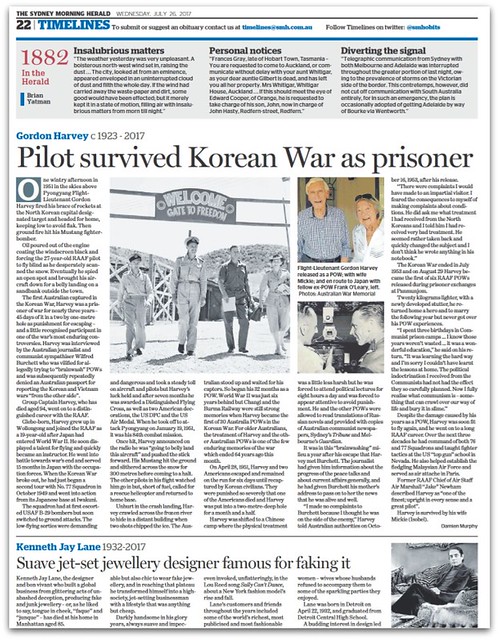 The death notices are very difficult to find, at least in the Sydney Morning Herald. You need to scroll to the bottom of the home page and click on 'Tributes' under 'Classifieds'. Sadly the message of this is that the deaths of ordinary people don't matter.

But the same can also be said for the lives of the famous that are written up in the obituaries. Curiously you need to click through to the 'Comment' section and go through to the second tier of the submenu there to find the 'Obituaries' link.

Worse than that, the obituaries page - headed 'Timelines' - no longer appears in the print edition every day. But only when there is space to fill. The Herald admitted as much to me when I called them a year or two ago to ask why they were not appearing every day as they had in the past. I was told they were not a priority: 'We don't always have space for the obituaries'.

For a while Fairfax has made it clear that the days of its Monday to Friday print editions of The Age and the Sydney Morning Herald are numbered. Yesterday I heard a rumour sourced from a Fairfax staff member that weekday print will end in February.

After a gap of a few years, I re-subscribed to the Herald print edition earlier this year because I wanted to be on board for the historic end of the paper's 186 year old tradition of daily print. 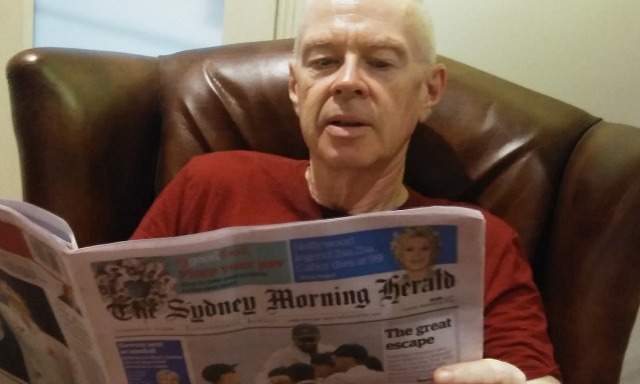 I've enjoyed printed newspaper delivery for most of my life. It was a childhood ritual to wake up early and race my brother to the front door. The one who was first to pick up the papers would be able to read his paper of choice.

We had two papers delivered - the Melbourne Sun (now The Herald-Sun) and the Albury Border Mail (owned by the one family for 103 years until it was bought by Fairfax in 2006).

The first to the door would always choose the Border Mail ahead of The Sun. We would have both papers read before our parents woke up and we had to hand them over. When there were fights, my mother reminded me that we were lucky to be able to read the papers before our parents.

When she was growing up in Ballarat and Bendigo, the children in her family were not allowed to read the paper before their father got to it. He had to have both papers together in mint condition, which hints that there might have been an element of almost religious ritual to the practice of reading the morning paper.

Living in various domestic situations and locations over the years, I remember there was always a dilemma about whether to separate pages of a single newspaper so that several household members sitting around the breakfast table can read it at once.

It would sacrilegiously break the integrity of the paper, but at the same time it would represent an act of solidarity. The other less satisfactory way of sharing the paper was to read it together in the hope that our interests and reading speed will converge.

Today it is less of a problem, as my breakfast companion reads the paper on his tablet while I read the print. As soon as this February, we will both be reading the paper on our tablets side by side.

I've always been an early adopter and a keen follower of media convergence. I remember back in the mid 90s when a Fairfax journalist friend laughed at me after I told him that I was reading Herald articles 'online' on my computer.

These days I'm keenly aware that both our print and electronic media consumption rituals can be very empty. The number of forms and outlets grows as fast as the quality evaporates and there is little point in continuing to subscribe, or even click on articles without paying.

We had a right to be impressed with the contribution of Herald investigative journalist Kate McClymont and her colleagues to the achievement of justice in this month's jailing of crooked politician Eddie Obeid. But sadly that kind of journalism is on the way out, and it has little to do with whether it appears in print or online.

Last week, blogger John Menadue - whom I assist - criticised journalists for showing little interest in exposing the debacle of the building of our next generation of submarines. Yesterday a Fairfax journalist emailed back saying that the specialist reporters needed for such tasks 'have become a breed nearing extinction'.

Today's reality is that even electronic forms of the old mastheads like the Sydney Morning Herald face extinction as most consumers source their news from Facebook. What is even more threatening to the health of our democracy - and indeed our entire civilisation - is the trend that has the emerging genre of fake news receiving equal billing alongside actual news.